Worldwide, Herpes simplex virus encephalitis (HSE) is the most common cause of sporadic acute viral encephalitis in adults (1). It has an incidence between 1 and 3 cases per million individuals, a mortality rate up to 30% and a high incidence of severe and permanent neurologic sequelae (2).Most cases (90%) are attributed to infection by Herpes simplex virus (HSV) type 1, while 7% are caused by HSV type 2, which have traditionally shown a more indolent form of central nervous system (CNS) involvement (3,4). It is thought that HSE results from a recent infection or reactivation of latent HSV genomes residing in certain CNS sites (2,3).

The diagnostic testing had evolved during these few last years. The key to establishing evidence of CNS inﬂammation is the analysis of cerebrospinal fluid (CSF). Lumbar puncture is often delayed due to performing brain imaging to exclude raised intracranial pressure (5). The application of polymerase chain reaction (PCR) for the detection of HSV genetic material (DNA) in the CSF provided the gold standard for the diagnosis of HSE (6).Magnetic resonance imaging (MRI) is the imaging of choice when encephalitis is suspected (5). Even with antiviral therapy, survival rates remain at 70% and life-long neurological deficits and sequelae such as anterograde amnesia, difficulties with executive function and aphasia are often reported (7).

The prognosis of HSE remains poor, especially if not promptly diagnosed. However, other factors may interfere and lead to a severe form of HSE. A better knowledge of this disease and its outcome predictors may help clinicians through the management of HSE. In this perspective, the aim of this work was to identify the epidemiological, clinical, evolutionary features and to study the outcome predictors of HSE.

We present the following article in accordance with the STROBE reporting checklist (available at https://dx.doi.org/10.21037/aoi-20-14).

We carried out a retrospective study including all patients hospitalized for HSE in the infectious diseases department over a 25-year period between January 1994 and December 2018.

Patients included in our study had a possible, probable or confirmed encephalitis based on the diagnostic criteria of the Consensus Statement of the International Encephalitis Consortium (8). Those criteria were based on a major criterion (required component) represented by an alteration of the mental status. It was defined as decreased or altered level of consciousness, lethargy or personality change lasting ≥24 hours with no alternative cause identified. Minor criteria included:

Data were collected from patients’ medical record on pre-established sheets. We recorded demographic data, duration and characteristics of clinical symptoms and physical examination findings. We recorded analysis of the CSF results including PCR detection of HSV DNA, electroencephalography, brain computed tomography (CT) and MRI. The delay between the onset of clinical signs and initiation of treatment, its regimen and duration, side effects and outcome were noted. We scored the level of morbidity as:

Due to retrospectively obtained data of the study, ethical approval and the informed patient consent were not required.

The study was conducted in accordance with the Declaration of Helsinki (as revised in 2013).

Statistical analysis was performed using SPSS 20. Qualitative variables were carried out by numbers and percentages. When the distribution was normal, quantitative variables were presented by means and standard deviation. Otherwise, medians and interquartile ranges were performed. The t test was used to compare two means if they were normally distributed. Chi square test was used for categorical variables in independent samples. Wilcoxon, Mann-Whitney, and Kruskal-Wallis tests were used when the variables were not normally distributed. The receiver operating characteristic (ROC) methodology was performed to evaluate the hospitalization delay or the treatment delay predicting poor prognosis. The optimal cutoff value defined as the value with the highest sensitivity and specificity was determined. The area under the ROC curve, sensitivity and specificity were calculated. The difference between two groups was considered to be significant when P<0.05.

During the study period, 225 patients were hospitalized for meningoencephalitis or encephalitis, among whom 30 patients had HSE, representing therefore 13.3% of all cases. Fifteen patients were male (50%). The mean age was 44±16 years. Nine patients were initially admitted to the intensive care unit and transferred later to the infectious disease department (30%). The median duration between the onset of symptoms and hospitalisation was 4 days (1–21 days). The most common clinical features were fever (96.6%), cephalalgia (70%) and aggressive behavior (63.3%). Physical examination revealed, besides fever (96.6%), meningeal syndrome in 19 cases (63.3%), confusion in 11 cases (36.7%) and obnubilation in 10 cases (33.3%) (Table 1). 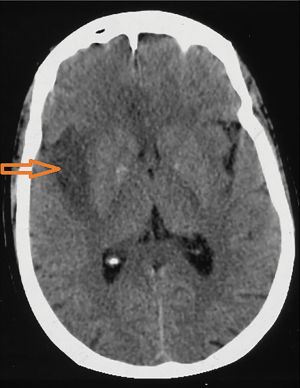 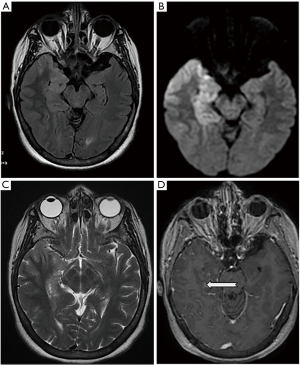 All patients received intravenous acyclovir for a mean duration of 19±7 days. The mean delay from the onset of encephalitis signs to initiation of treatment was 5±2 days. Empiric therapy was initiated on admission prior to confirmation of the diagnosis in 18 patients (60%). Side effects were noted in 5 cases (16.6%). Corticosteroid therapy was prescribed in 8 cases (26.7%) for a mean duration of 9±3 days. In order to treat or to prevent seizures, anticonvulsant therapy was prescribed in 23 cases (76.6%). It was continued after discharge in 10 cases (33.3%). The disease evolution was marked by the occurrence of recovery without sequelae in 10 cases (33.3%). Sequelae were noted in 18 cases (60%) represented by mild sequelae in 7 cases (23.3%) and severe sequelae in 11 cases (36.7%). Two patients were dead (6.7%). In total, there were 17 cases with a favourable prognosis (56.6%) and 13 cases with a poor prognosis (43.3%). 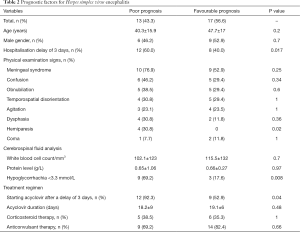 The analysis of the ROC curve showed that for a threshold value of 3 days between the onset of clinical signs and hospitalization, the sensitivity was 92% and the specificity was 53% to predict a poor prognosis in patients having HSE (Figure 3). 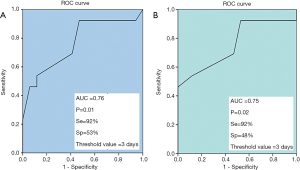 The analysis of the ROC curve showed that for a delay of 3 days between starting antiviral treatment and the onset of encephalitis signs, the sensitivity and the specificity to predict a poor prognosis in patients with HSE were 92% and 48%, respectively (Figure 3).

Our study highlighted the burden of HSE, which remains a fatal, life threatening disease associated with a poor prognosis and neurological sequelae especially when the diagnosis and the treatment were delayed. The factors associated with a poor prognosis were hospitalization delay of 3 days after the onset of symptoms, hemiparesis noted on physical examination, hypoglycorrhachia in CSF and starting antiviral treatment with a delay of 3 days. It was not a rare disease, representing 13.3% of all meningoencephalitis cases in our study.

The revealing symptoms varied widely. They are not pathognomonic of HSE and might reveal other causes of acute encephalitis (9). Many patients present with viral-like prodromal symptoms including headache, fever (10), behavioral changes and occasionally olfactory hallucinations (11). Then, signs of encephalitis progress over the course of several days (12). The most common manifestations were altered mentation, reduced level of consciousness, fever, seizures, headaches and focal neurological deficits including cranial nerve deficits, hemiparesis, dysphasia, aphasia or ataxia (11,12). Other studies found that in younger children, the initial symptoms of the disease are usually insomnia, irritability, movement disorders or epileptic seizures, while psychiatric disorders are less common (10). Depending on their clinical presentation, patients may require admission to the intensive care unit. A study made in Texas found that most hospitalizations for HSE were admitted to intensive care unit (59.9%) among which 45.8% were aged ≥65 years (13). In our study, 30% of patients were initially admitted to the intensive care unit. Despite the well-described clinical features of HSE in different studies, they remain non-specific and might mimic other diseases.

Once the diagnosis is suspected and after ruling out contraindications, lumbar puncture should be performed as soon as possible. Typical CSF abnormalities include elevated protein, CSF leukocytosis with predominance of lymphocytes (60% to 98%). The absence of CSF leukocytes should not eliminate the diagnosis since cases of HSE without CSF leukocytosis have been reported (11).Hemorrhagic CSF is not specific to HSE since hemorrhagic encephalitis can also be seen in varicella zoster, rubella, Epstein-Barr virus or amoeba infection in immunocompromised patients (14). As for CSF glucose value, it is usually normal, although cases of hypoglycorrhachia have been previously reported (11), which is consistent with our results.

The cornerstone of the diagnosis is PCR detection of HSV DNA in CSF. However, at an early stage of the disease, PCR can be false negative (15), that’s why it has to be repeated within 48 to 72 hours in patients with suspected encephalitis (16). In our study, 26.7% of patients had a negative HSV PCR, but they were already treated with acyclovir when lumbar puncture was performed, that’s why no control was made. Previous studies reported that cases with initially negative, but subsequently positive PCR on a repeat CSF testing had positive MRI signs compatible with HSE at the time of initial negative PCR (15).

Neuroimaging is always indicated. As for CT scanning, it is usually normal within the first 4 to 6 days of disease. However, it is basically indicated in the presence of focal neurologic signs, before lumbar puncture in order to rule out contraindications (2). MRI can aid in the diagnosis of HSE by demonstrating typical imaging findings, which include asymmetric hyperintense lesions on T2-weighted sequences (12). MRI is considered the most sensitive and specific imaging method for the diagnosis, particularly early in the course of the illness (12). However, up to 5% of patients with HSE have a normal MRI (17). Therefore, imaging alone should not exclude the diagnosis of encephalitis. During the diagnostic process, EEG may play a major role especially in front of atypical clinical findings and potential negative laboratory examinations. In the acute stage, EEG can show lateralized periodic discharges, sharp waves and focal or generalized slowing. These patterns can reflect the focality, extent of the disease and may even inform about the prognosis (18). In our study, diffuse slowing was the most common abnormality (65%).

When clinical, laboratory, radiographic and neurophysiologic findings suggest the diagnosis of HSE, empirical treatment should be initiated with no delay. Acyclovir should be administered at a dose of 10 mg/kg/8 hours for 14 days in immunocompetent patients (19). Early initiation of acyclovir is the most readily modifiable factor for improving outcomes (12). Previous studies reported that an unfavourable outcome both at discharge and at one year was associated with a delay in the initiation of acyclovir after admission and longer delays had the most serious neurological consequences (4). Other studies reported that older age, coma, restricted diffusion on MRI and delay in the initiation of acyclovir were the factors associated with the worse outcome (9).

The use of corticosteroids in the treatment of HSE is controversial since it may potentiate viral replication and cell damage if they are given at a too early stage. However, most authors seem to support the delayed use of corticosteroids following the introduction of an antiviral therapy in intracranial hypertension due to HSE. Its efficacy was demonstrated in several retrospective studies (20). Besides, anticonvulsant therapy is often indicated in order to treat seizures, since HSE is highly epileptogenic (21).

Our study confirmed the severity of HSE cases and its poor prognosis mainly associated to diagnosis and treatment delay. Studying the prognostic factors may help clinicians in the management of cases of HSE. In front of febrile altered level of consciousness, the diagnosis of HSE should be strongly considered and prompt empiric acyclovir treatment should be started in order to improve the prognosis.

Reporting Checklist: The authors have completed the STROBE reporting checklist. Available at https://dx.doi.org/10.21037/aoi-20-14

Conflicts of Interest: All authors have completed the ICMJE uniform disclosure form (available at https://dx.doi.org/10.21037/aoi-20-14). The authors have no conflicts of interest to declare.

Ethical Statement: The authors are accountable for all aspects of the work in ensuring that questions related to the accuracy or integrity of any part of the work are appropriately investigated and resolved. Due to retrospectively obtained data of the study, ethical approval and the informed patient consent were not required. The study was conducted in accordance with the Declaration of Helsinki (as revised in 2013).