Adolescents with HIV-infection are a vulnerable group of persons. They are faced with many challenges like poor drug compliance with increase mortality. HIV infection is one of the leading cause of death in adolescents and the global increase in HIV related death was primarily seen in adolescents (3). Achievement of viral suppression of 90% of all people receiving antiretroviral therapy requires a major focus on adolescents living with HIV infection. Non-adherence amongst HIV-infected adolescents is a major issue that must be addressed in order to achieve the targets to end AIDS epidemic by year 2020.

A recent cross-regional cohort analysis of perinatally infected adolescents from many reported that lost to follow-up (LTFU) care was highest amongst subjects in sub-Saharan Africa (5). However, this analysis did not include data from Nigeria- a country with the second highest number of persons with HIV infection and the only country with increase mortality rate in adolescents. This may create lacunae in the knowledge of the current state of HIV infection among adolescents in sub-Saharan Africa, hence the need for this study. We set out to conduct a retrospective study of data of HIV-infected adolescents assessing care at the adolescent HIV clinic of the Lagos State University Teaching Hospital, Ikeja, Lagos since its inception two years ago.

The authors conducted a retrospective study on data routinely collected on patients with no contact with the subjects at the time of data evaluation. Hence, no consent or ethical approval was obtained for the study. The study was however conducted in accordance with the declaration of Helsinki (6).

The Adolescent HIV clinic was carved out in January 2017 from the Paediatric HIV clinic which has been in existence since 2007 to meet their peculiar psychosocial and clinical needs in a supportive atmosphere of respect, privacy and understanding. Currently, the clinic runs once a week. It involves the adolescents aged ten to nineteen years.

At enrolment at diagnosis and in adolescent clinic and with subsequent visits, patients’ biodata, general examination findings and laboratory investigations were obtained according to guidelines. Virological diagnosis of HIV was made in subjects that presented below 18 months of age at diagnosis using HIV-DNA PCR of dried blood spots while antibody testing (Determine rapid test) was done in older subjects. Confirmation of reactive antibody testing was done with Western Blot test on another blood sample.

LTFU was defined as failure of patient to attend clinic for at least 180 days and there is no record of death or transfer (7).

Body weight of individual was recorded at enrolment and routinely using a weighing scale. The height was measured with subjects standing barefoot and looking forward using a stadiometer. In subjects enrolled below 2 years, length was recorded using an infantometer.

Height for age (HFA) was assessed at enrolment and on clinic visits. Subjects with HFA Z score <−3 were classified as very stunted and those <−2 to −3 as stunted (8).

Laboratory investigations (CD4 count and viral load) were done at the IHVN Haematology & Virology laboratory dedicated to HIV care. Disease stage was classified into one to four at diagnosis according to World Health Organization criteria (9). Viral load assay is done six months after commencement of HAART and subsequently annually at the hospital’s general haematology laboratory. CD4 count is routinely requested at diagnosis, and subsequently every six months.

A total number of 273 adolescents were enrolled and transferred to adolescent clinic in LASUTH in the last two years (January 2017 to December 2018). In all, 269 (98.5%) acquired HIV infection through maternal-to-child transmission. A total of 138 (51.3%) of perinatally infected subjects were males with male-to-female ratio of 1.1:1. The subjects had been followed up for a mean duration of 100.6±37.4 months ranging from 7 months to 216 months since diagnosis.

Almost half (49.5%) of the subjects were diagnosed before the sixth birthday.as shown in Table 1. 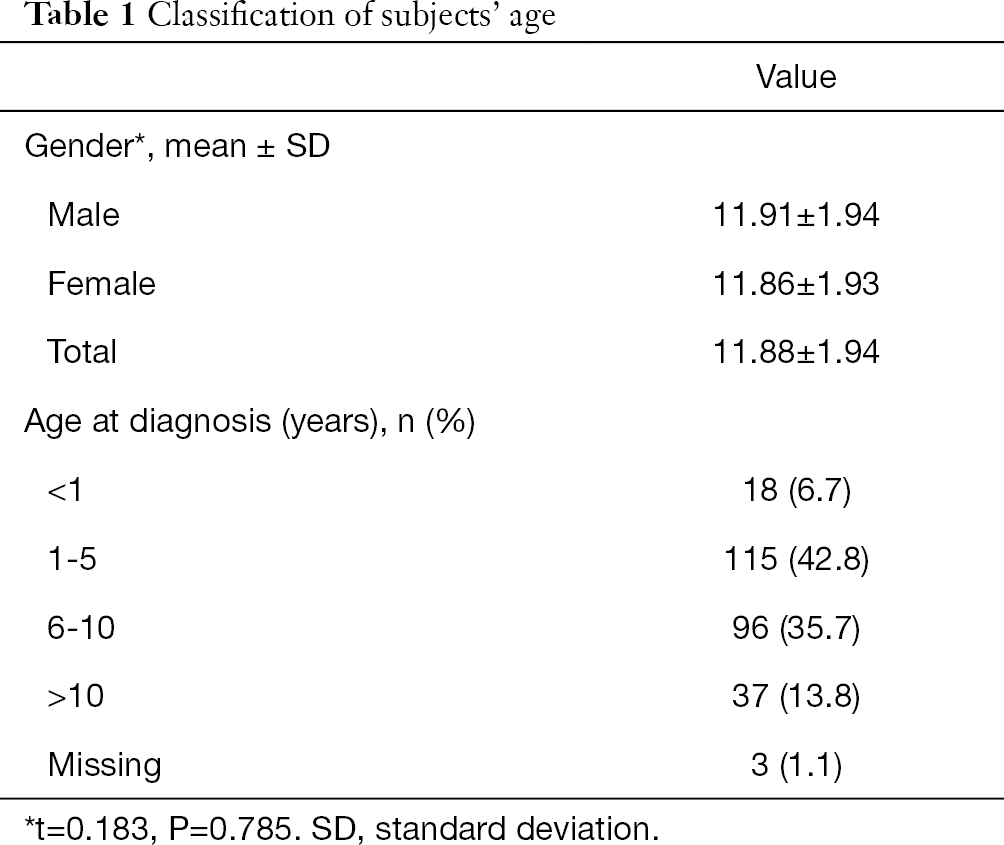 Almost half (48.3%) of the subjects had severe disease (stage 3 or 4) while about one-third were asymptomatic (stage 1) as shown in Figure 1. 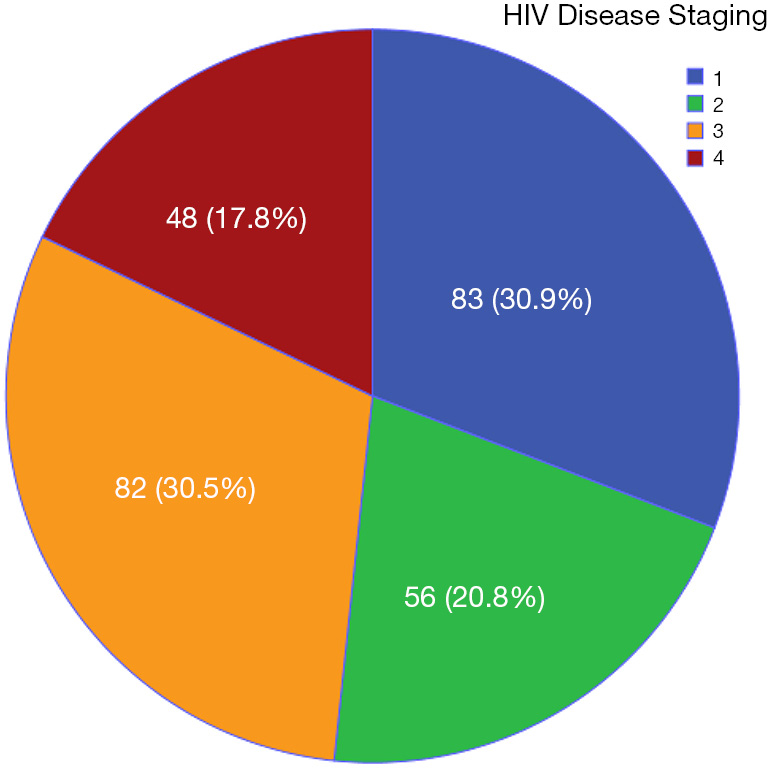 Relationship of ARVs on nutritional status 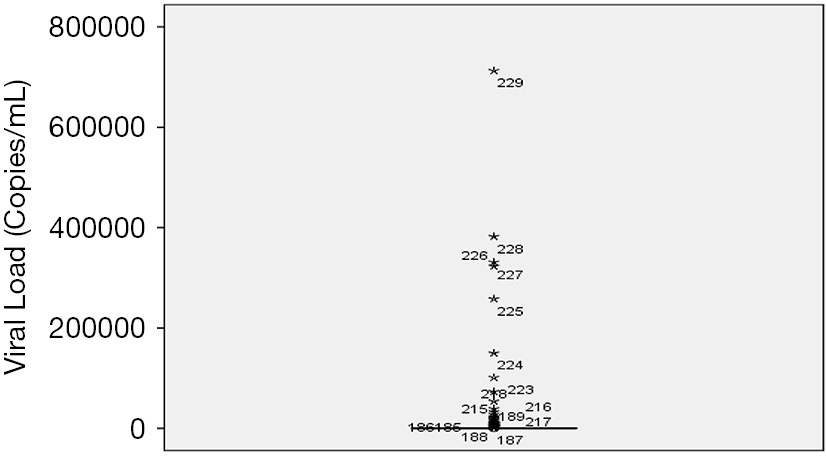 The recent median CD4 count in 153 subjects that had investigation done was 772 cells per microliter (cells/µL). Minimum and maximum CD 4 count varied between 10 and 9,521 cells/µL.

A significantly higher proportion of subjects with stage 3 and 4 disease classification were switched to second line ARVs due to treatment failure compared to those with milder disease as shown in Table 5.

Overall, 10 (3.71%) mortalities in the subjects enrolled in the study centre. Five of these mortalities occurred in subjects with stage 4 disease. In all, 20 (7.4%) of the subjects were LTFU in care. No relationship was seen between outcome of care and disease stage as shown in Table 6.

Over a two-year period, 269 HIV positive adolescents with vertical transmission of infection were enrolled into our adolescent HIV clinic at Lagos State University Teaching Hospital.

A slightly higher proportion of male adolescents were enrolled compared to female counterparts. This sex distribution is different from reports by Mbalinda et al. (10) in Uganda and a cohort analysis of some sub-Saharan Africa by CIPHER and co-researchers (5) where female predominance was observed.

Equal proportions of subjects were diagnosed between ages five years and below and above five years with a median age at diagnosis of five years. This is slightly higher than 4.1 year with most diagnosed at infancy reported by MaWhinney et al. (11) in Boston. The low percentage of diagnosis in infancy noticed in the present study may reflect lateness of diagnosis of infected children that contributes to high mortality rate.

Almost equal proportion of subjects had stage 1 and 3 disease which were the highest disease staging in the current study. This is in contrast to report by McHugh et al. (13) in Zimbabwe where over-half of affected adolescents had stage 1 and 2 disease. There is need for more effective ways of identifying infected children at an early stage in our environment which will contribute to reduction in morbidity and mortality from HIV infection.

In the present study, subjects diagnosed at older age were more likely to have AIDS than younger subjects. This finding is in keeping with report by Mugavero et al. (14) in North Carolina, USA. Late diagnosis, late commencement of ARVs and advancement of disease increases risk of disease transmission. With advance disease in older age group where risky sexual habits is more likely, the need for early diagnosis as a tool to prevention of transmission of HIV disease cannot be overemphasized. Late diagnosis increases disease progression in individuals with HIV infection (15). It was therefore not surprising in the current study that occurrence of AIDS was commoner in children diagnosed at older ages.

Duration before commencement of ARV drugs after diagnosis ranged between day zero to ten years in the current study. Median age of subjects when ARV was commenced in the current study was 6 years. This late drug commencement is in keeping with report on Cohort analysis of adolescents with perinatal HIV by the collaborative Initiative for Paediatric HIV Education and Research Global Cohort Collaboration and co-authors (5) on some sub-Saharan countries when compared to 0.9 years in North Carolina. Late age at commencement of ARVs is as a result of late diagnosis, a contributor to high mortality in HIV infection. Similar proportion of subjects in the current study commenced ART late when compared with report in the global cohort analysis (5).

Subjects with advanced disease were more likely to be stunted compared to those with stage 1 and 2 diseases. Significant improvement in height was observed following the commencement of ARVs. This finding is not surprising because malnutrition is a common clinical manifestation in HIV infected children and administration of ARVs has been shown to restore growth in affected individuals (16). The finding of malnutrition in about a quarter of subjects at the last visit is worrisome. Similar finding in the global cohort study shows this is not limited to our centre. HIV infection causes growth faltering (17) and its significant importance as a determinant for survival (18) indicates the need for effective and consistent nutritional support of affected individuals.

Majority of adolescents in the present study have been on ARV drugs for less than ten years. A similar finding was documented in all reviewed countries in the global cohort analysis (5). Previous recommendation of WHO on commencement of ARVs at a certain CD4 count as well as late diagnosis will account for the lower period on medication compared to the age at diagnosis (19).

Quite a high proportion of subjects in the current study have been switched to second line ARV therapy due to drug failure and resistance. Over one-fifth of the subjects are not virally suppressed with viral load above 1000 copies/ml. Failure of drug compliance, treatment failure and resistance are major problems in adolescents. This finding in adolescents with high risk of harmful sexual habits, avoidance of disclosure and spread of infection requires urgent attention. In our centre, support group and measures such as reminder on drug administration using text messages and phone calls are measures currently adopted to increase adherence to medications. To achieve treatment target to end AIDS epidemic by the year 2020, effective tools to address treatment failure in adolescents globally cannot be overemphasized.

A relationship between treatment failure and disease staging was established in the current study. This is similar to report by Kyaw and co-researchers (20) in a study done in Myanmar in Asia. Baseline low immunity and high viral load have been shown to reduce response of individuals with HIV to treatment (21).

HIV related mortality in the current study was 3.71%. This is slightly higher than reported value of 2.9% in other sub-Saharan Africa in the cross-regional global cohort study (5). Nigeria is the only country with a rising mortality rate of HIV-related deaths in adolescents (4). There is urgent need for interventions that will effectively reduce these avoidable deaths in this group of individuals.

In conclusion, adolescents with perinatally acquired HIV-infection are on the increase due to increase availability of ARV drugs. This group of individuals are faced with poor drug compliance, treatment failure, high rate of LTFU and death. Improvement in their care is essential in achieving target of ending AIDS in the nearest future. There is also need for a large cohort study of adolescents with HIV infection in Nigeria.

Conflicts of Interest: All authors have completed the ICMJE uniform disclosure form (available at http://dx.doi.org/10.21037/aoi-19-13). The authors have no conflicts of interest to declare.

Ethical Statement: The authors are accountable for all aspects of the work in ensuring that questions related to the accuracy or integrity of any part of the work are appropriately investigated and resolved. The study was conducted in accordance with the Declaration of Helsinki (as revised in 2013). The authors conducted a retrospective study on data routinely collected on patients with no contact with the subjects at the time of data evaluation. Hence, no consent or ethical approval was obtained for the study.