Chronic prostatitis and small intestinal bacterial overgrowth: is there a correlation?

Clinical management of chronic inflammation of prostate and seminal vesicles is very complex. When on infectious bases, cultural semen analysis can be useful in determining etiological agents even if, also in presence of leukocytospermia, a clear responsible microorganism is not easy to identify. In presence of bacterial growth in semen, the eradication is not always easy to attempt.

Infections can be cause of infertility but also the presence of leukocytes can have negative effect on seminal parameters and the spermatozoa function. Chronic prostatitis (CP) is often associated with granulocytes in prostatic fluid with a generation of radical species of oxygen (ROS) with a vicious circle on fertility.

Among the causes of recurrent CP, a possible malabsorption, such as lactose intolerance, in turn related to small intestinal bacterial overgrowth (SIBO), should be considered; bacterial population moves toward small bowel for better disposable of sugar, even if digestive capacity for sugar is preserved (2,3).

In order to evaluate the prevalence of positive breath tests (BTs) in patients affected by CP, we have evaluated a group of patients, consulting our center for infertility, with recurrent positive cultural tests, performing lactose and lactulose BT.

We have studied 42 patients aged 25–40 years. Subjects involved in this study were admitted to the University Hospital “Policlinico Gemelli” Department of Internal Medicine and were enrolled after being given an explanation of purposes and nature of the study, conducted in accordance with the Declaration of Helsinki, as revised in 2013. The study protocol was approved by our Institutional Board and written informed consent was obtained from all patients. They underwent H2 BT using lactose and lactulose and microbiologic semen analysis for aerobic and anaerobic bacteria, mycetes and mycoplasms by cultural and molecular methods.

Standard semen analysis was performed according to WHO criteria (4). In both BT, H2 respiratory air samples has been assayed by gascromatograph and results expressed as part per million (PPM).

Lactose H2 BT is a rapid, simple, reproducible and cheap method for diagnosis malabsorption. It is based on the fact that, in presence of lactase, the disaccharide lactose is divided in glucose and galactose, rapidly absorbed by bowel mucosa, without production of hydrogen. When lactase is not persistent, lactose reaches the colon where bacterial colonia induced fermentation with production of hydrogen methane and carbon dioxide.

Lactose BT measures inspired H2 before and after, every 30 min for 4 hours, lactose administration (20 g per os). The increase of H2 >20 PPM is index positivity. The sensitivity and specificity approach 100% (5).

Lactulose H2 BT is employed to evaluated oro-caecal transit time (OCTT) and SIBO. Lactulose is not absorbed in small bowel and is quickly metabolized with production of carbon dioxide, marked with 13C, which is measured in inspired air, with a latency time corresponding to OCTT.

10 g lactulose are administered with measure every 15 min for 4 hours. The positivity of the test is based on one of these features: (I) two discrete peaks with two consecutive H2 values >10 PPM; (II) production of H2 at a distance <90 min after lactulose ingestion (6).

Seminal data were consistent with asthenozoospermia, associated or not with oligo-or teratozoospermia in every patient (Table 1). 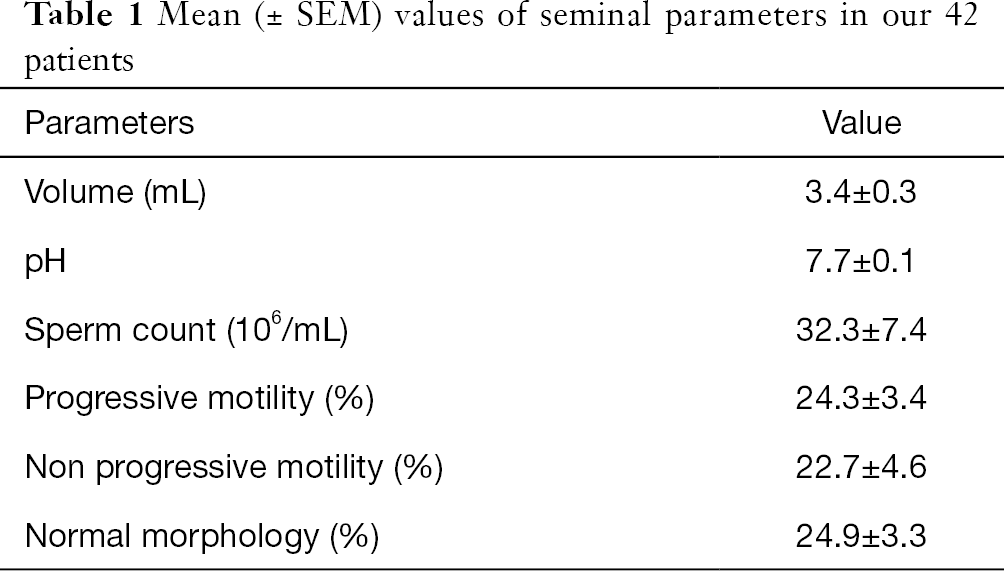 A positive lactulose BT was present in 33/42 patients and in 73% (24/33) was associated to lactose malabsorption. Five patients had positive response after lactulose, while only 4 had both negative tests.

SIBO is a condition characterized by abnormally high bacterial population level in the small intestine, exceeding 106 organisms/mL (7-9). Different factors, including the intestinal tract affected, the severity of contamination, the presence of altered motility or anatomical abnormalities of bowel, can influence clinical manifestations. In presence of insufficient intestinal clearance, SIBO is predominantly distal, colonizing ileum and jejunum; prevalent bacteria are enterobacteriaceae. On the contrary, when gastric acid barrier is insufficient, SIBO is often proximal (stomach, duodenum, proximal jejunum) and the dominant flora is represented by Gram positive bacteria, derived from upper respiratory tract (7,10). It is difficult to establish a correct prevalence of SIBO, which is often under-diagnosed. A high prevalence of SIBO has been shown also in irritable bowel syndrome (IBS), contributing to symptoms in such conditions (11). The positivity of BT in IBS has been found to be 30.7%, compared with 3.9% of controls (12). Other studies showed an increased bacterial flora in 43% IBS patients, compared with 12% of healthy subjects, without relation with severity of symptoms (13).

BT represents a valid and non-invasive tool for approaching these disorders (14). They are based on the gas produced by bacterial fermentation, which diffuses into the blood and are excreted in breath samples. Hydrogen is not produced in healthy humans in fasting state, but only after anaerobic metabolism, which can occur during bacterial fermentation. Anaerobic bacteria metabolized carbohydrates, producing CO2, short-chain fatty acids and hydrogen (15). Individual microbiota and gastrointestinal transit time influence the results of BT (16). Glucose BT is commonly used for the diagnosis of SIBO, since is rapidly absorbed in the proximal small bowel and does not reach the colon; therefore, it is especially useful in high SIBO. Lactulose is a manufactured disaccharide, which is not metabolized, producing fermentation in the colon; therefore, it is useful in low SIBO but also give information on OCTT (14).

There is a reciprocal influence between bowel diseases and SIBO. Moreover, malabsorption can favour SIBO. Sugar malabsorption can be primary (as adult-type hypolactasia or lactase non-persistence) (17) or acquired (after damage of bowel mucosa) (5), furnishing substrate for bacterial fermentation. However also in primary SIBO, a false positive lactose BT can be observed, even in presence of normal disaccharidases (18). In such cases, the correction of intestinal flora can reverse this false positivity.

Other than malabsorption (especially of lipids and liposoluble vitamins), other consequences can be observed, ranging from translocation of bacteria (usually gram-negative and aerobic bacteria) from gastrointestinal tract to extra-intestinal tissues (19) until sepsis and multiorgan failure (20). Predisposing factors are again reduced epithelial barrier and immunological defense (19,20).

A few data are reported on SIBO in CP. A pilot study in 16 patients showed SIBO and IBS to be common in CP and were beneficially treated using rifaximin therapy (21). This topic is very important since various antibiotics, used in CP, are not effective in such condition, thus explaining the recurrence of prostate inflammation.

Our data show and association between lactose and lactulose BT positivity. The bacterial overgrowth could cause abnormal H2 production with the consequence of false results in lactose BT. Alternatively the bacterial overgrowth could damage intestinal mucosa, determining transient deficiency of lactase or other proteinic carrier. They also indicated high prevalence of bacterial colonization of small bowel in patients with CP, possibly related to recurrence or chronicity of genitourinary tract inflammation.

The research for these phenomena could be relevant in diagnostic route of infertile patients in whom slight gastro enteric symptoms can be underestimated.

Conflicts of Interest: The authors have no conflicts of interest to declare.

Ethical Statement: The study protocol was approved by our Institutional Board and written informed consent was obtained from all patients.